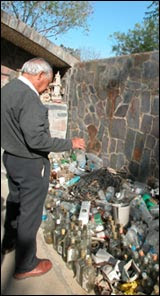 Now here is a man commited to his rock garden and sculpture.One day 36 years ago,

Nek Chand, a humble transport official in the north Indian city of Chandigarh, began to clear a little patch of jungle to make himself a small garden area. He set stones around the little clearing and before long had sculpted a few figures recycled from materials he found at hand. Gradually Nek Chand's creation developed and grew; before long it covered several acres and comprised of hundreds of sculptures set in a series of interlinking courtyards.
After his normal working day Chand worked at night, in total secrecy for fear of being discovered by the authorities.When they did discover Chand's garden, local government officials were thrown into turmoil. The creation was completely illegal - a development in a forbidden area which by rights should be demolished. The outcome, however, was the enlightened decision to give Nek Chand a salary so that he could concentrate full-time on his work, plus a workforce of fifty labourers. Nek Chand's great work received immediate recognition and was inaugurated as The Rock Garden of Chandigarh.
Now over twenty five acres of several thousand sculptures set in large mosaic courtyards linked by walled paths and deep gorges, Nek Chand's creation also combines huge buildings with a series of interlinking waterfalls. The Rock Garden is now acknowledged as one of the modern wonders of the world. Over 5000 visitors each day, some 12 million people so far, walk around this vast creation - the greatest artistic achievement seen in India since the Taj Mahal.
Tags: rock garden rock sculpture Home Garden rocks waterfalls

I came across this rock wall in a collection of photos. I don't know where it is but the variety of the color of the fieldstone is really nice. 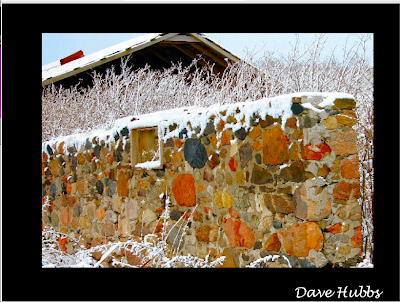