The decison has been made to rubberize all the ponds including the dogleg. The bottom pond while still working pretty well is being encrouched upon by plants around some of the edges breaking the concrete. So it can't be filled to it's max depth. So with a sale on the rubber happening we decided to go for it. I am going to have to shrink size the bottom pond a little as the measurements are a little over 10 feet. Not wanting to special order the membrane size adjustments are in order.
There are a lot of sites that show how to build ponds, I am curious what others look like after a long period of time. Ours has gone through many changes over the years. I'm sure others have also. One thing no one seems to hear as how high maintenance they can be. I'd love to see pics of other folks ponds.
Tags: Minnesota Gardens Home Garden ponds water falls

I finally aqquired a leak in the top pond, after all these years. That was also a concrete pond it had been recemented several times over the years so I broke down and bought the rubber membrane for this like I did for the middle pond last year. I buy this at the nearby farm store where they charge $4.95 a running foot. So thats a one foot by ten foot .045 mill thickness of EPDM from Rubberall That's quite a good price. As long as I'm on the subject. The pump we are using and still works good is a Wayne 1/3 hp sump pump. Again we went with the sump pump because of cost. The 1/3 hp, when I bought it many years ago was $69. I have gotten lazy the last number of years and don't even take it out of the pond in the winter. Believe me here in Minnesota my pond freezes to the bottom. I have been impressed with it's durability. it's rated as 3450 GPH at 5' Head. It is a good 15' head difference from the bottom pond where the pump is to the upper pond. Now that we have revived the middle pond my wife wanted a faster water rate so we switched to the Wayne 3/4 hp stainless which is rated at 4200 GPH at 5'. $150 at the farm store. We can really tell the difference. The only modifications made were to take the float off, turn the switch on, leaving it on, as we plug the pump in to use it. So here's my video of that. Still got some tweaking and fine tuning to do. 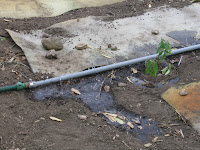 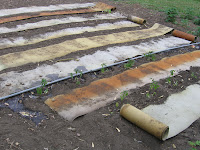 A little trick we've been using for a few years in the vegetable garden. Comes in handy, especially when we have had dry weather like we have had this spring as well as conserving water. The combination of the felt like material, recycled from a paper mill and cut into strips, holds the water really well. I made a drip line out of .5 inch plastic electrical pipe, which was half the price of regular plastic pipe. One end was capped , the other end has a plastic to hose thread adapter, not regular pipe thread. Holes were drilled about every 5 inches. The water drips out along the length of the pipe.
Tags: Minnesota Gardens vegetable garden Home Garden watering the garden

We made this video before we even got the new pond finished but what the heck. It's there.
Tags: Minnesota Gardens Home Garden rocks ponds water falls

A couple of photos of where the water came out for the middle pond. The black pipe coming out of the back supplied the water, pumped from the lower pond. The pipe was connected to a 'T' that was 18" long with holes drilled in it, to spread out the water as it flowed over the large flat rock. Moving this rock proved to be quite a chore. 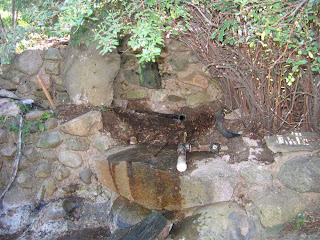 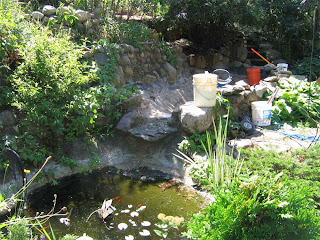 The pond after all the plants had been moved out. Getting ready for the next step.
Tags: Minnesota Gardens rock sculpture Home Garden rocks ponds water falls 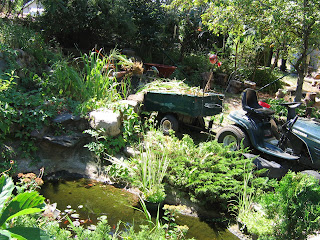 This is last summer when we started to clean out the cattails and plants out of the middle pond. It had been very dry, so the bottom was dry. The roots had twisted themselves up and created a mass 5 inches thick. The bottom against the cement base came up like a carpet. I found out the best way to take it out was to use a large knife and cut it out in sections. If you look close I am almost hidden in the cattails.
Tags: Minnesota Gardens Home Garden rocks ponds water falls