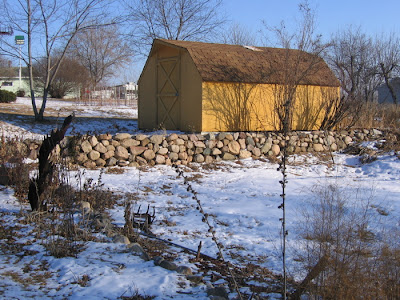 This wall has a interesting history. The granite fieldstone rocks were originally split by a local stone mason during the 1930's, to create a retaining wall for a playground area at the local school. They are all what I would call basketball size. They were split by hand, there is a definite trick to splitting granite. People tell me there is a grain to these, but it takes a real trained eye to see it. They had built a new school and converted the building into an assisted living facility. The playground area was split up and a individual was going to build a house on the side where the retaining wall was. I was driving by one day and the wall was being bulldozed. Now with my penchant for rocks, I went back and asked what was going to happen to the rock. I was told they were going to have to pay to have them removed. I asked if I could have a few , sure help yourself, was the answer. The rocks had been cemented together but in the process of breaking down the wall, I suppose since they had been there for 75 years, or maybe the fieldstone were not washed when it was built, there was not the super bond to the rock and a lot of the cement broke off. This made them easier to work with. As I cleared up the loose pile. The next day the owner had taken the skidloader and used it to looseen up more of the cement off the rock. It took me more than a week loading the rock by hand on my little truck and hauling them home, piling them up. I did not have a plan for what to do with them yet. I wound up with a huge pile of rock, most of which had one flat side. As that was the reason for the original splitting purpose, the wall being flat. I got the idea that one end of our garden that had a retaining wall of old railroad ties would look better if it was made out of rock. That took another week of digging out the old ties and cutting back the dirt to prep for the rock wall. The plan was to make a stack wall. By using the larger boulders on the base. and making the wall so it leans back into the hill a slight degree, made the wall very stable. It took longer to build as I had to find rocks that were compatible to being next to each other and I also wanted the flat side to be on the surface. The main wall is about 3 to 4 foot high and aproximitely 30 feet long. I had enough rock to build a 18-24 inch wall around the rest of the garden as well as a composte pile area wall. I feel really good about this project. I couldn't see all those rocks being wasted. I am a big believer in recycling materials. Plus I like the history aspect of the use of these rocks. If you made it this far on the post, thanks for your patience.
Tags: minnesota gardens flower gardens gardens rock wall